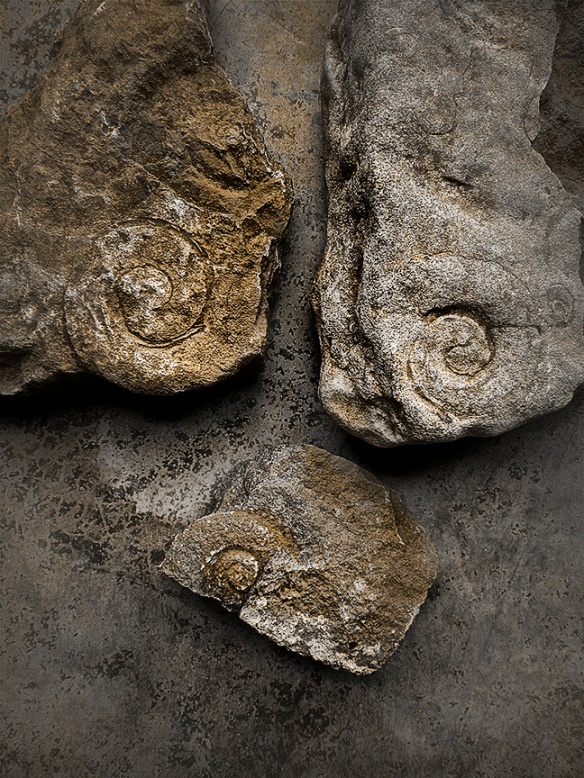 This trio of gastropods was found at the site of a barn on the Goodsell Ridge Preserve on Isle La Motte, Vermont. The Preserve, an 81 acre nature and geologic preserve, is home to Chazy Reef, a remarkable and unique 480 million year old fossil reef formation. And on Saturday (Sept. 19) the aforementioned barn, now newly renovated, will open as part of the island’s annual Teddy Roosevelt Day festivities.

The barn will be a multipurpose space for the Preserve, a site used for everything from nature center to exhibition and event space. And I have been asked to provide the opening art exhibit. This first set of images, as well as others I had posted two weeks ago, will be part of the show – all images of the various fossils I encountered during my visits to Chazy Reef.

As for Teddy Roosevelt, this yearly event pays tribute to this most famous conservationist, who had visited this island in September of 1901. Various events will be taking place across the island. The final event of the day will be a reception at the Goodsell Ridge Barn at 4:00 pm. The exhibit will be open all day beginning at 11:00 am.

There are plans currently to keep the show up permanently or, at least, indefinitely. Hopefully, the prints will encourage visitors to take more time to explore the reef and recognize and appreciate its importance. 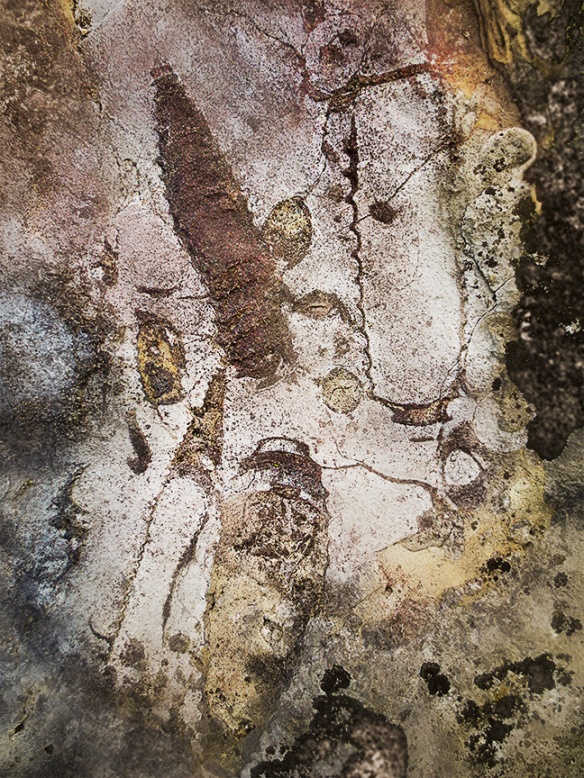 One more note about ILM – On my last visit I walked all the way to the far side of Fisk Quarry (the other part of the Land Trust) and found this. It is one of two very large stromatoporoids in the quarry. Known as “reef-formers” these invertebrates are classified as sponges. 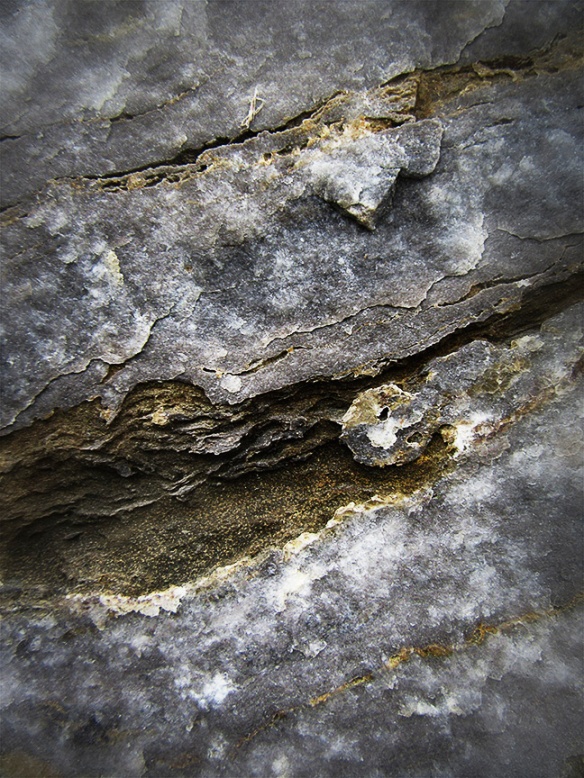 These are a few close-ups of the stromatoporoid that measures roughly 5’x5′. 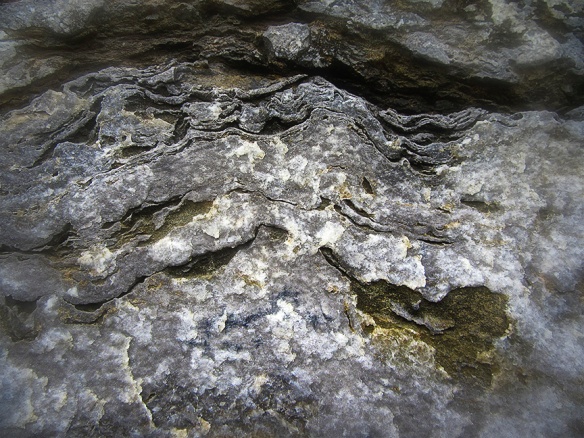 I’ll try to have more images next week of the island and all the festivities. 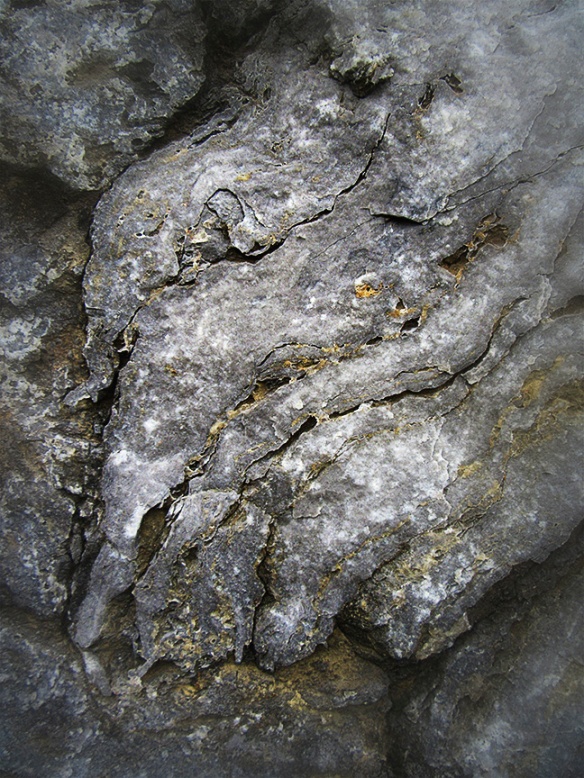 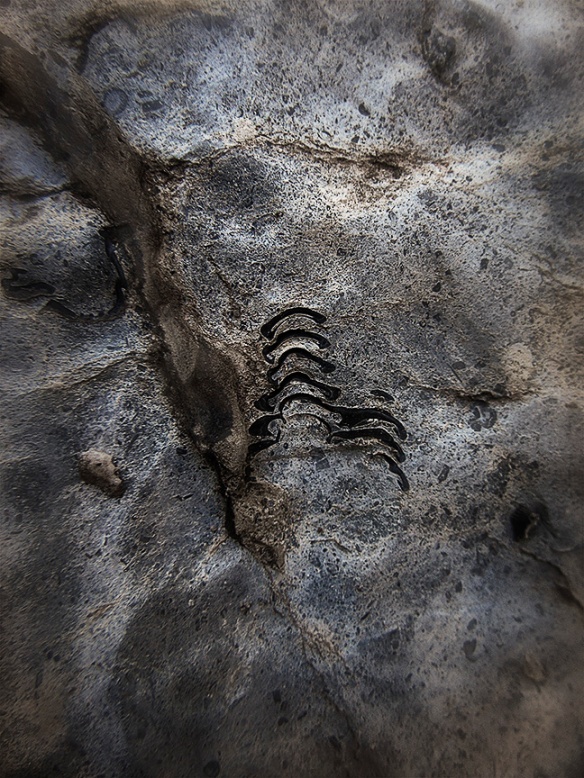 Last week I brought you images from the rocks along the Kaaterskill Creek. This week I have a few more to share. In the interim, one long night of a 5″ rainfall has filled the creek once again. So it may be a while before some of these fossils reappear.

These next two images tell an interesting story. As I mentioned last week, fossils down here appear as the cherty rock surfaces ever so slowly dissolve (thanks to enviromental effects, i.e. the flow of the creek).

The image above was taken in September of 2007. I found it again last week. Take a look at the image below to see the changes that have occurred during the last eight years! Amazing to me, given that this coral has been around for hundreds of millions of years!

And, finally, these little things again! I still have no idea what they are but I do find then strange and interesting. They remind me of aboriginal art! 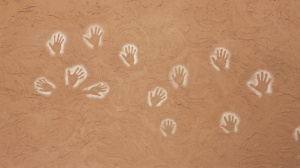 On our recent trip to Maine, Cindy and I stopped first in Vermont to visit friends on Isle La Motte, a beautiful island near the top of Lake Champlain. We were first drawn to the island a few years ago when we sought out the world famous, 480 million year old Chazy Fossil Reef. That visit, which resulted in a show of my Chazy Reef fossil images, also began several friendships that grow warmly with each passing year.

So it was time for a visit. Dinner with friends, old and new; a visit to a terrific exhibit “A Walk Through Time” at the Goodsell Ridge Preserve; and,of course, another chance to photograph some of the oldest fossils I’ve ever had the opportunity to encounter.

The Preserve, one half of the Isle La Motte Preservation Trust, is an 81 acre reef site with a Visitor’s Center and Museum. Also, there sits a newly revived and revitalized barn that will soon formally open and serve as a nature center. It’s an old beauty brought back to life by the skilled hands, strong commitment and deep love of the local folks. They are as much a treasure as is the actual reef. For it is only due to their efforts that this world-important science site remains preserved as a National Natural Landmark.

The formal dedication and opening of the Goodsell Barn is set for September 19. I have been asked to produce a show for that opening. It is an honor and a pleasure to take part in the event. I’ll have more information on the show and related events soon. In the meantime, this is a selection of images, all taken at Chazy Reef, that I am busy printing and prepping for the show. 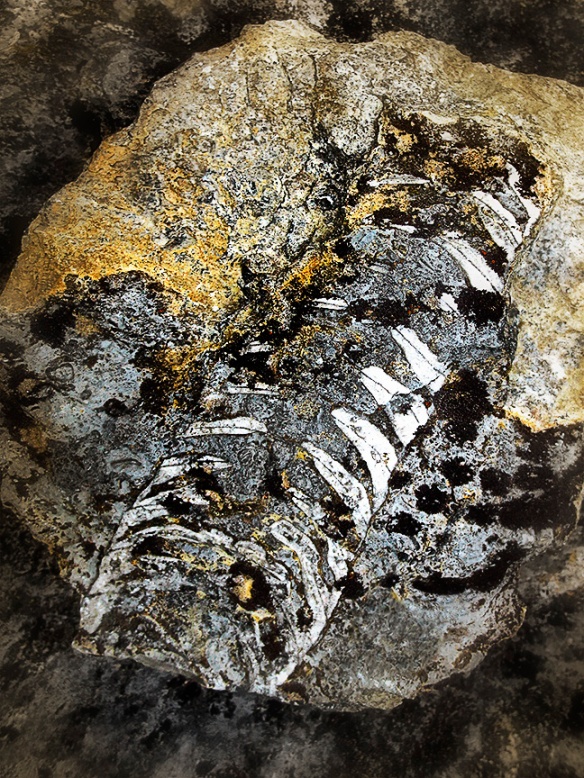 And now, on to Maine.

A few more images taken of the rock walls – those that are assaulted every day by the ocean tides.

It seems like every day I was drawn to these rocks…

…and every evening to our favorite place at sunset.

We’re already planning for our trip next year! Thank you Eric and Betty!

Once darkness fell we had company! They were no problem. They hid in the dark and didn’t eat much!

The local quarry, which has been a focus of mine lately, has spoiled me. Thanks to the current owner, a large section of the most fossil-laden layer (a few feet deep, I believe) has been dug up and piled very high in several places. I simply show up and load the back of my car with rocks of all shapes and sizes. 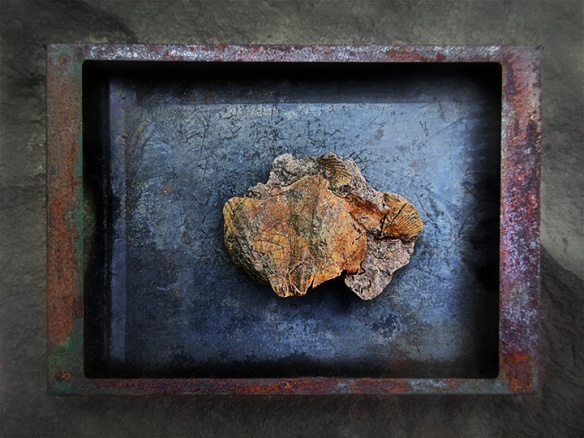 To be sure, I do employ some discrimination. And, while I’ve become more and more particular, I can still load the car in very short order.

That main layer has little variation in what can be found – brachiopods mostly. (That’s why you usually see an abundance of them on this blog). Since I am more interested in the aesthetic possibilities than scientific discovery I am usually more than busy and happy with that situation.

But there is something to the broader notion of exploration. And I was feeling that the other day as I pulled up to the same place and started to load my bag like usual. Other parts of this quarry contain some other types of fossils – different layers from different times – but far less abundant.

So I set out to find them that day. And here is some of what I found.

I even took a minute to explore the woods that form the outer boundary of the quarry  – good timing for this one!

Before I close, let me tell you about a wonderful event taking place this Sunday (June 22) on Lake Champlain – Isle La Motte, Vermont, to be precise. There you will find, at the Goodsell Ridge Preserve, the most ancient Chazy Reef (480 million years old). You’ll also find the dedicated group of local volunteers responsible for its preservation. And on Sunday, they invite you to the following:

If you are anywhere in the vicinity please drop by. If not, then plan a trip sometime this summer. It’s a wonderful place to visit – a place to learn about and view amazing things.

What started as a brief getaway turned into a trip full of surprises that I wish to share today. We decided to point the car in the general direction of nearby Vermont with only one destination – and that only for a few hours of exploring and shooting. From there the plan was no plan – just wherever whim might take us. A google search for “Vermont fossils” yielded the name “Chazy Reef,” a site unfamiliar to me but worth checking out. And, after a couple of emails back and forth, we were set for a guided tour.

According to Charlotte Merhtens, Ph.D. and geologist at the University of Vermont, “The Chazy Fossil Reef is significant as the oldest known occurrence of a biologically diverse fossil reef, the earliest appearance of fossil coral in a reef environment, and the first documented example of the principle of ecological faunal succession (the process of change in an ecosystem over time.”) The reef itself takes up approximately the lower third of Isle La Motte, which sits in the northernmost section of Lake Champlain. It reaches back in time to the Ordovician Period, roughly 450 to 480 million years ago.

Equally fascinating to me is the story of the Isle La Motte Preservation Trust and its founder and president, Ms Linda Fitch, the indefatigable (and charming) driving force behind it. Linda, one of the 500 residents of this island wonderland, was moved to action back in the 90’s when the sound of a jackhammer signaled the revival of quarrying operations at the old Fisk Quarry, threatening the tranquility of the island but more importantly threatening this storehouse of important information about earliest life on this planet. After years of legal battles, Ms Fitch and her friends and neighbors established the Trust. According to their website: “It was founded in 1998 by citizens who wanted to preserve the historic Fisk Quarry, site of an ancient 480 million year old fossil reef known to scientists as the Chazy Reef. Since then, thanks to partnerships with the Preservation Trust of Vermont and with the Lake Champlain Land Trust,  ILMPT has now acquired over 100 acres of the fossil reef on Isle La Motte. This land is now protected in two preserves: the Fisk Quarry Preserve and the Goodsell Ridge Preserve.”

The lead image is one of many fossils (in this case a gastropod) found in the exposed bedrock. Many more to come in the next installment after I wade through the ample shooting I was afforded. Until then I’d like to share some of the island with you. 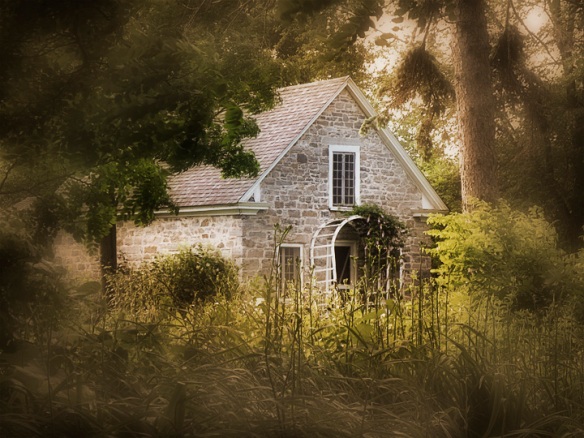 Upon completion of my shooting, as we prepared to depart to points unknown, Ms Fitch told us that one of her guest cottages was available if we cared to stay. The stone cottage, built in the 1700s(?), had all the charm one could wish for. Of course we stayed. 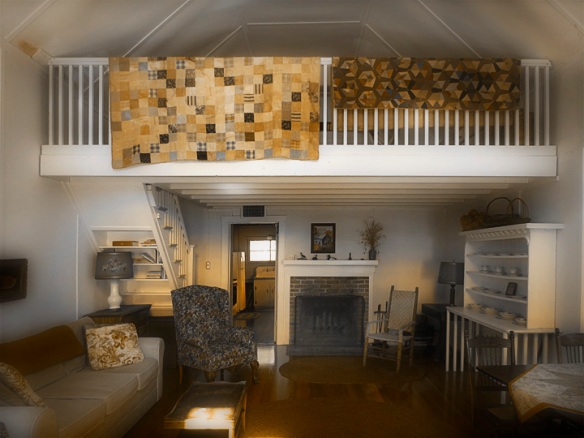 And the view out the front door was priceless.

…site of some of the strangest fossils I’ve ever seen – stromatoporoids – reef builders that look like giant cabbages. That’s them – looking from afar like whitewashed graffiti (close-ups to come).

Equally amazing is the old Fisk Farm, visited by Theodore Roosevelt in 1901 and now Ms Fitch’s home, a compound that includes the aforementioned cottage, main house, barn and assorted outbuildings.

The refurbished barn acts as an art gallery, a performance space touting a pair of baby grand pianos (with an appropriate Summer schedule of world class musical events). Across from the barn is the Tea Room, site of Sunday gatherings throughout the Summer. 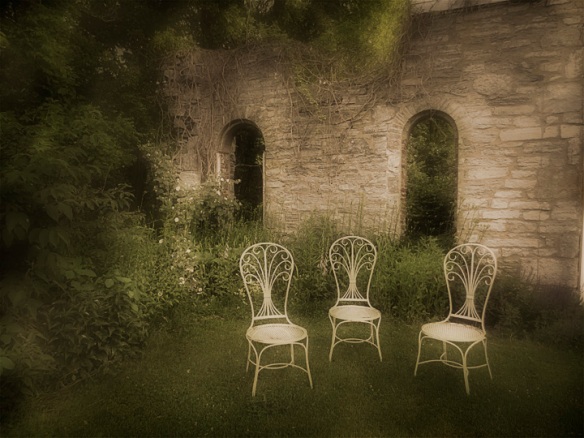 So what looks like a sleepy island retreat is in fact a focal point of interesting current activity, historical anecdotes, and profound scientific value. And with Ms Fitch’s ever optimistic bent and boundless energy, the future holds enormous promise.

I’ll have more on this trip in future posts. Until then,I’ll leave you with a few random pics from the visit, including a smile goodbye from Isle La Mott! 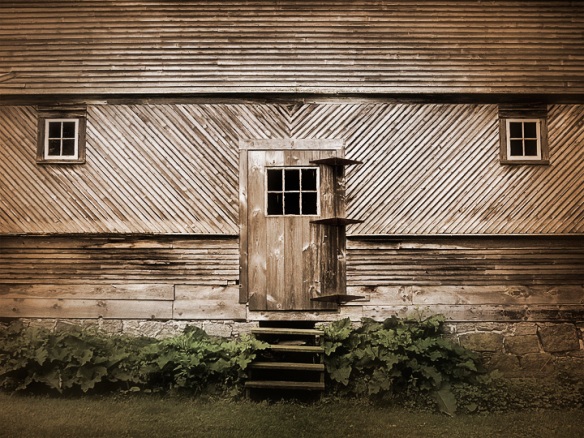 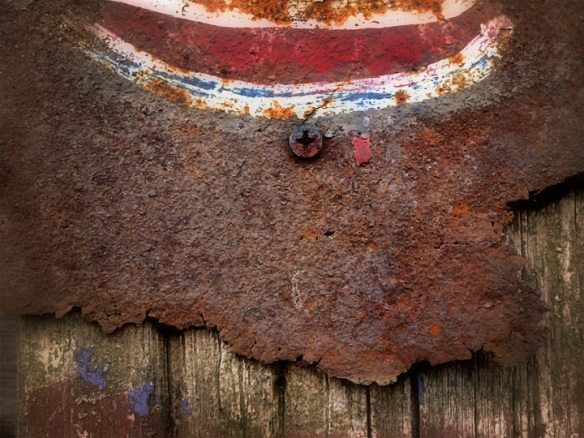